First, I agree with Pope Francis on many things he says and does (unlike his predecessor), and the direction in which he is taking the church. However, he has expressed an opinion that I strongly disagree with, and think is inappropriate for someone in his position. According to this report:

Gesturing towards Alberto Gasparri, a Vatican official who was next to him on board the plane, he said: “If my good friend Dr Gasparri says a curse word against my mother, he can expect a punch on the nose”.

Throwing a pretend punch, the Pope said: “It’s normal. You cannot provoke. You cannot insult the faith of others.

To a layperson, it seems that he is saying that if 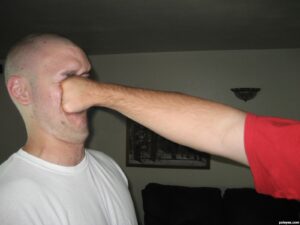 someone insulted his mother, he would punch him in the nose. That sounds like the Pope is endorsing violence against one who is not violent, simply because his feelings were hurt. Perhaps recognizing this misstep, the Vatican spokesman tried to do damage control:

Obviously he wasn’t justifying violence. He spoke about a spontaneous reaction that you can have when you feel profoundly offended. In this sense, your right to be respected has been put in question.

Ah, the good old “figurative”, “that’s not what he meant despite what he said” defense.

And Rev. Robert Gahl tries to further weasel out by saying,

Francis didn’t say that HE would have punched his friend for insulting his mother. He said his friend could expect to be punched, given that he should know that he had crossed a moral line in lobbing the insult and should be more careful and courteous in not causing offense.

Let’s see if this makes any sense by taking the holiness out. Imagine a drug lord telling an associate, “if dat punk ever *expletive, present participle* comes into mah territory again, he can expect a bullet through his *expletive, present participle* head”, while simultaneously making a gun gesture with his hand, pressing it against someone’s forehead, and fake-pulling the trigger. The intention of the drug lord – violence – seems more than clear, and the method – perforation of bone and thinking organ with metal pellet – is not ambiguous. Whether he does it personally or not, one can reasonably conclude: the drug lord does not merely passively condone, but actively endorses the threat of violence, and is ready to act if needed.

The example clearly shows that the Vatican spokesman was correct. The Pope obviously wasn’t justifying violence. He was ENDORSING violence. Ideas should be judged on merit alone; the person who expresses them should be irrelevant. Even if you are the Pope.

The line of argument taken by the Vatican spokesman and Rev. Gahl reminds me of the former President Clinton and Ms. Lewinsky case. Mr. Clinton narrowly avoided successful impeachment and perjury, by exploiting the incompetence of the prosecutor and creative but tortuous logic. He questioned the meaning of “is”, and came to the conclusion that even though Ms. Lewinsky was fellating him, she had sexual relations with him, but not vice versa! According to the declaratory definition, maybe. That’s getting off on a technicality, a distinction without a difference. For non-lawyers, think about how absurd that is for a moment. If one is getting serviced orally and concludes that he is not in a sexual relation, then what, exactly, is the nature of the act? For hygiene? For the taste?

Rev. Gahl argued that the Pope never said that HE would personally commit violence, despite the Pope himself gesturing with a flying fist to the victims nose. Technically he is correct. One is left to ponder, if not by the Pope himself, then by whom exactly? The Holy Secret Service? A Papal hitman? The Holy Mafia? None of these scenarios are any better than the Pope taking a swing himself.

One often overlooked but exciting possibility is, perhaps the Pope’s mother, unhappy at being offended, flies from Argentina to find the person whom she likely does not know, and punches him in the face for an insult she did not hear. This would make the Pope merely unable to stop violence from happening, however if that is what the Pope meant, he needs to work on his communication. In any case, we are talking about a technicality. When others are trying to get you out of trouble, and the best they can do is rely on a technicality, you are on thin ice indeed. Especially if you are the Pope.

Contrary to what one might think, and as Dr. Pinker has shown in his highly recommended book, violence has greatly declined. Violence should rarely, if ever, be the response to non-violence in a civilized society. We have been moving in the right direction. We teach our children to “use words”, instead of fists, when they disagree. In a fight, we punish the one who threw the first punch. Disappointingly, this could be the Pope.

Freedom of speech is a basic human right, under Article 19 of the Universal Declaration of Human Rights by the UN. Unless the speech present a “clear and present danger”, all forms of expression should be protected, as unsavory or hateful as they may be. The problem is not with expression itself. It is with those who resort to violence when confronted with ideas they find offending; and to a lesser extent, those who feel that this type of violence is justified.

Update: The Pope, perhaps realizing the problematic situation he has created, backtracked somewhat.